Asya Kozina, from Ukraine, and Dmitriy Kozin, from Russia, glance at history and create modern versions of the clothes and wigs of the past. The beautiful, elegant and bombastic concept is based on historical epochs and expressed mainly in paper wigs. – The history of costume, clothing and accessories is the platform and the foundation of our work, says Asya Kozina.

Asya Kozina’s and Dmitriy Kozin’s joint history is based on the Baroque era, bombastic expression and their fascination for sculptures and paper art. They live in perfect symbiosis and complement each other, in daily life and at work.

– Dmitriy is the innovator, the fearless dreamer and the adventurer. I am the thorough hardworking perfectionist, says Asya, and Dmitriy adds:
– I completely agree with Asya, and I want to add that what she does is just perfect, fantastically talented and masterful.

It all begun ten years ago when Asya created a series of miniature wigs in paper, which she exhibited in her hometown, Cherkasy, Ukraine. Five years later, she followed up with a vernissage where models carried her clothes and wigs of paper. The vernissage was a success. Since then, Asya and Dmitriy have developed their paper wigs further, but always with history as the foundation.

– We chose the Baroque era for our first project as it is so inspiring. It is very important for an artist to base a project on something rich in associations. The entire history of fashion is an inexhaustible source of inspiration for us, says Dmitriy.

"At some point I even hesitated becoming an artist, because it meant too much responsibility and setting too high a goal."

To Asya, the garments and wigs are more than just fabric from the past. Every piece of clothing tells a story about exactly why it was created and is a symbol for its time, a connection both she and Dmitriy are deeply fascinated in.

– I think we long for something long-forgotten, as popular culture puts too much emphasis on technical progress and efficiency. This is why we love the Baroque era. The value of those wigs were primarily aesthetic, they were notably uncomfortable to wear, but they were also wonderfully beautiful and exquisite, not necessarily practical or having a powerful message. I think people are so tired of special effects, says Dmitriy. 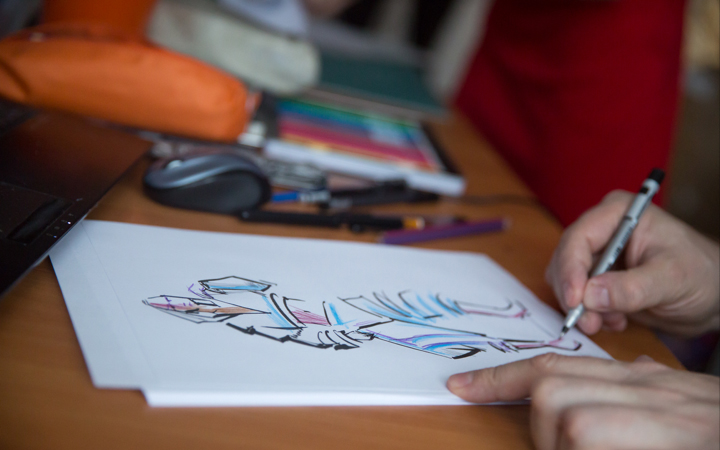 Their work is based on a lot of research, reading library books from cover to cover. Asya studies pictures, illustrations and visits museums to get as different perspectives as possible, to create a genuine image.

– Our creative process always begins with making sketches of our ideas, or even writing them down and discussing them together. Then we research the subject and start the actual work. We may change something in the process, but in most cases, we know what we want and move towards our goal. It is great to be completely absorbed in the project and to work around the clock. Pizza is a given on those days, says Dmitry. 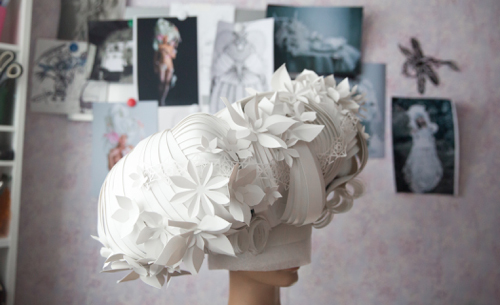 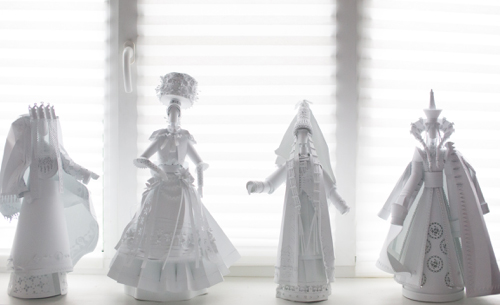 In their projects, they let themselves be inspired by the past, while choosing to combine the past with the present. They embrace the spirit of the Baroque and make it modern vintage.

– Baroque and Rococo wigs used to be adorned with symbols of luxury, sophistication and the romantic spirit of the time, such as model frigates, stuffed birds and exotic flowers, so we asked ourselves which modern objects would best serve as symbols of our time.

For Asya and Dmitriy, the technique is less important, but rather the result. They rely on their spontaneity and ingenuity to bring them bombastic results.

The art has been a companion since childhood through life, for both Asya and Dmitriy. They have been surrounded by creative expression in different forms.

– I grew up in a family in which everyone was involved in art. My dad is a printing designer, my mother is the founder of a private Art Studio at which she teaches fine and decorative arts. I have watched and breathed art for as long as I can remember, says Asya.

Dmitriy comes from a similar background with an artistic family. His grandfather was a celebrated artist, and Dmitriy's dad followed in his footsteps.

– At some point I even hesitated becoming an artist, because it meant too much responsibility and setting too high a goal. Then I realized that doing what you really like is far more important than outshining your father or grandfather.

Their background eventually became a solid foundation to build upon and to rely on when they developed their own creative expressions.

– I have always been fascinated by paper, ever since I fell in love with my grandmother’s intricately cut Chinese bookmarks. At the age of ten I fell ill and had to spend a lot of time in bed. My mother showed me the technique of symmetric paper cutting and I was hooked for a long time, and I still am. My parents still treasure the album with my first pieces of work, says Asya. 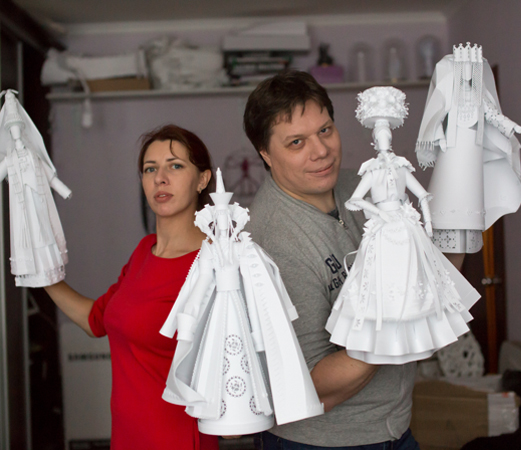