The artist Pippa Dyrlaga from Yorkshire, England, cuts out extraordinary images from single sheets of paper. She mostly works with really thin Japanese washi paper and loves to cut out birds, since images of birds will always look like a moment frozen in time, and she wants to capture that in her work. Her delicate paper art has caught attention from all over the world, with exhibitions in metropoles like New York and Tokyo as a result. 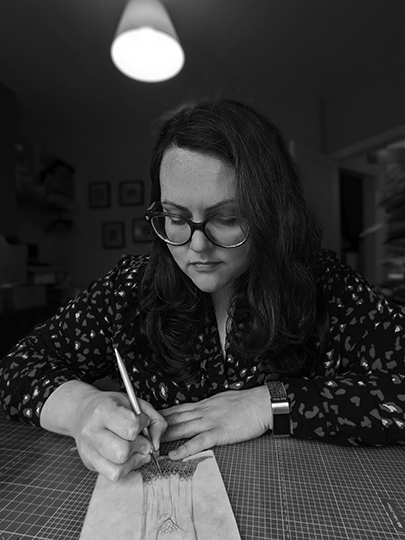 When Pippa Dyrlaga was around ten years old her parents decided to move the whole family – mom, dad and three sisters – to a canal boat out on the British countryside. Pippa therefor spent most part of her childhood surrounded by wildlife and nature, which are some of her biggest sources of inspiration today. Her need for a creative outlet was strong already as a child, she loved working and creating with her hands and always picked up things in nature she found beautiful. Later on, after high school, she was certain that she wanted, and needed, a job she was passionate about rather than something that foremost should pay the bills.

She decided to study Contemporary Art Practice and then graduated with a Masters in Art and Design 2011. And that’s when she found papercutting. She was working on a project where she was drawing bears and she started cutting out silhouettes and realized that was a very strong graphic image which she enjoyed.

– I just loved working with it! And this was also during a time where I couldn’t afford expensive material, so it was a great way for me to be quite prolific. But mostly, I absolutely fell in love with it. I also got influenced by other paper artists at the time, Rob Ryan for example, who showed me that papercutting can be used for so many things – like graphic design and print, says Pippa.

"I feel the weight of the history of paper"

Pippa explains that she isn’t much of a planner, so her artistic road hasn’t been straight forward. She started her paper cutting journey with the bears and mostly made personal work and today she’s prepping for an exhibition in Los Angeles and working on pieces for different kinds of commercial commissions. She really stresses that she’s very grateful for being able to work full time with her passion, even though it can take days – up to several months – to finish one piece. Her artwork is extremely detailed and since she mostly works with thin Japanese washi paper, it’s also very fragile. But even if Pippa loves to do both commercial and personal commissions, the work she’s the proudest of is her fund raising project for her village in Yorkshire. The small village lies in a valley and gets flooded every few years, so the citizens live with the constant worry of waking up in the morning with floodwater in the living room. Back in 2015, there was a very big flood in the area, and the huge task of cleaning up the village started. The flood really affected Pippa who wanted to help out as much as possible.

– I spent all day cleaning up and was all covered in river mud, the power was off for like three days. It was horrible. We had just moved here as well and I wasn’t mentally prepared for it. But after the cleaning up I went home and made this piece of work – like a strong reaction to what I’ve seen and on how everyone in the village came together, I found that really inspiring. I made the design and then put it on bags, mugs and prints etcetera. The papercutting is not the best work I ever made, but I’m really proud of the result. Since then, I think I’ve raised around five thousand pounds, money that have helped the village come back on its feet after a flood, says Pippa. 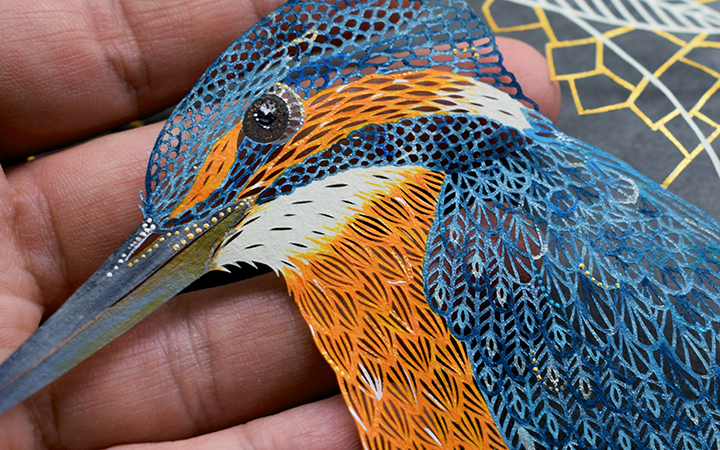 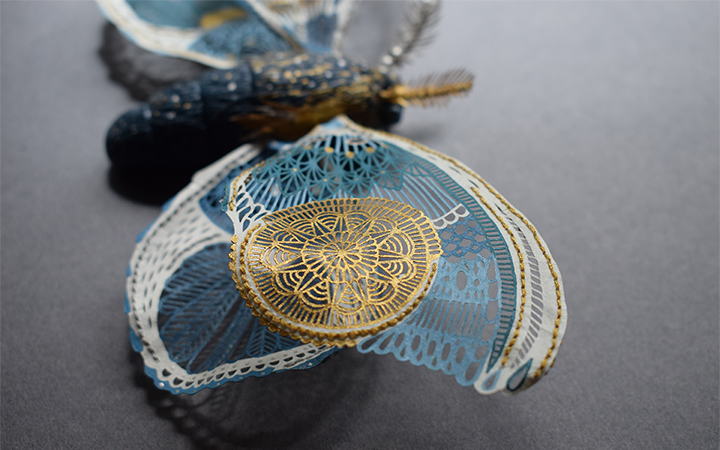 A material with a history

Pippa first realized she had a passion for paper a couple of years after picking paper cutting as a medium. She was starting to explore the world of paper and eventually understood how versatile the material really is.

Now she is also experimenting with painting her cuts and sewing them with colorful threads – but paper will always be her firsthand choice.

– I feel the weight of the history of paper, and the responsibility of one of the most common materials between us has, no matter who we are. It is important to every culture in different forms. And it is accessible to everyone too, from printer paper to the nicest Japanese handmade papers. Each paper has its own qualities that make it good for different tasks, Pippa concludes. 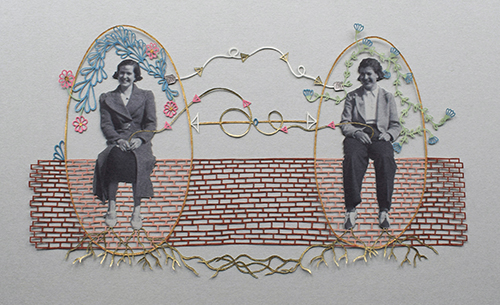 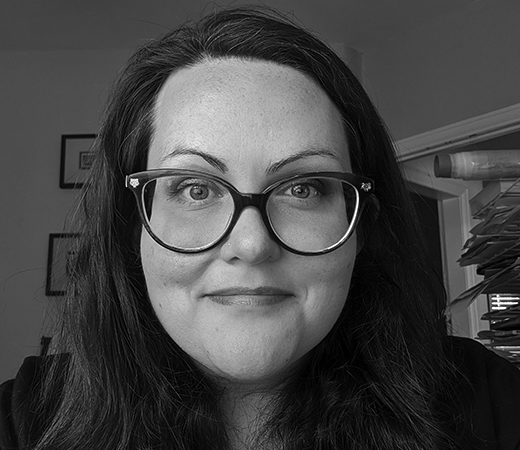