After pondering the short lifespan of most paper objects, the Korean-New Zealander WooJai Lee decided to give new life to the material of his childhood. For the past four years, the Dutch-based designer has made a career out of recycling newspapers into bricks and furniture.

When WooJai Lee graduated from Design Academy Eindhoven in the summer of 2016, his exam project caught the attention of the European design community. Magazines and blogs were eager to get an interview with the innovative Korean-New Zealander, and galleries around the continent wanted to feature his paper furniture.

– I think the reason why it gathered so much attention was a combination of people being fascinated about how such a fragile material as paper can be made into sturdy furniture and the trend of sustainability that was taking shape at the time, WooJai says. 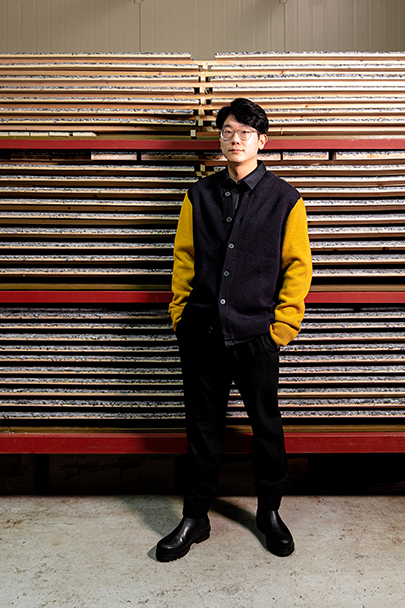 "Normally when paper gets recycled, it downgrades and becomes weaker, but I wanted to turn it into something strong and solid."

By soaking shredded newspaper in hot water, WooJai creates paper pulp which is dyed with whatever colour he wants for the bricks.

Living his first years in the South Korean city of Jeonju before moving to New Zealand as a ten-year-old, paper was a ubiquitous element of Woojai's early childhood. Jeonju is famous for its paper industries, and when his mother didn't take him to paper museums, they would often experiment with the material by making different objects out of paper pulp. WooJai's upbringing helped inform his decision when choosing a graduation project, but the exact form came to him as he was taking his trash out a few months before it was due. Seeing a bin filled with old newspapers, magazines and pamphlets, he thought about the short life span of most paper products. Many newspapers and pamphlets get read once, if even, before being thrown away. There and then he decided that the project would revolve around giving new life to old newspapers.

– It wasn't about just extending the lifespan of the paper but giving it new strength. Normally when paper gets recycled, it downgrades and becomes weaker, but I wanted to turn it into something strong and solid. After some thinking, I came up with the concept of bricks made out of paper and contacted a printing company that was happy to give me misprinted newspapers to make them, WooJai says. 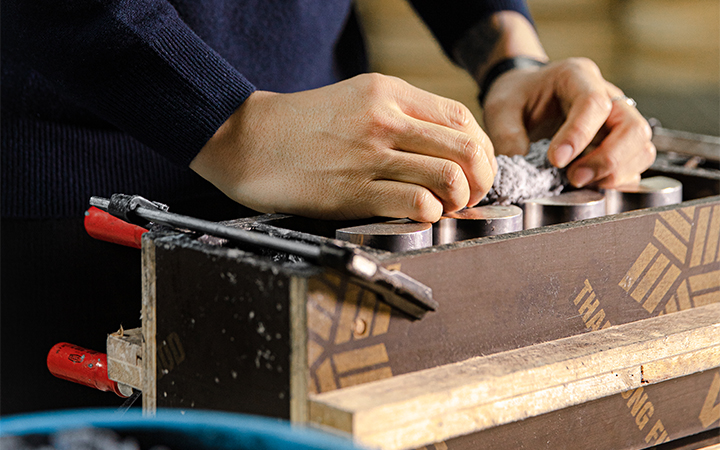 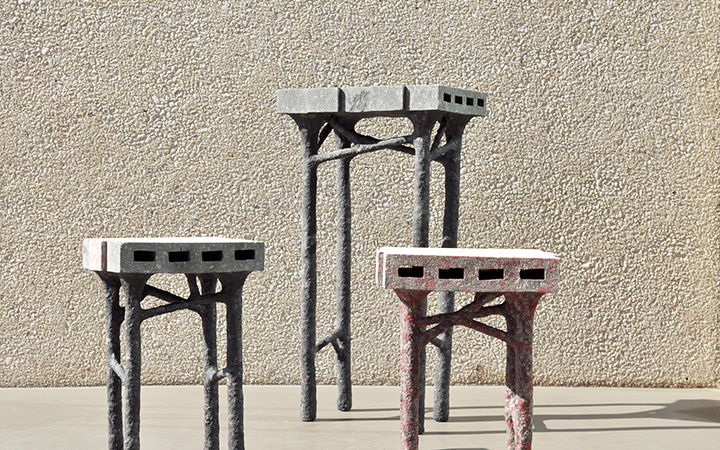 WooJai was approached by COS with a request to build the facades and most of the interior out of paper in one of their stores in Gwangyo in South Korea. Images in courtesy of COS.

He constructs the bricks by using a very similar technique to the one his mother taught him as a kid. By soaking shredded newspaper in hot water, he creates paper pulp which is dyed with whatever colour he wants for the bricks. The dyed pulp is then mixed with glue and put in a brick-shaped mould to harden. When the mixture dries, the evaporating water brings the ink from the newspapers to the surface, and WooJai has to cut or sandpaper the edges of the bricks to bring his chosen colour to the front. The bricks can be displayed as they are or constructed around a wooden frame to make different types of furniture. The furniture is sturdy enough to be used for everyday purposes, as long as they are kept on a safe distance from water. 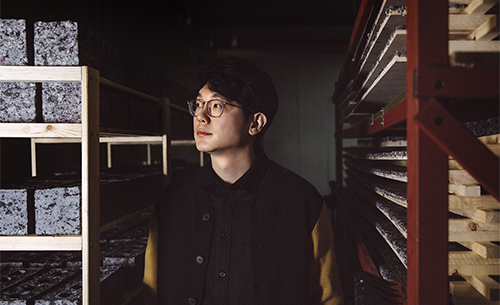 – You can spill liquid on them, but they wouldn't withstand a rainfall. Of course you can coat it with plastic to make it more endurable. I've done that with a few of my pieces, but after putting in all this work to make paper into furniture, I don't like to turn it into plastic by making a coating. Even if it extends the lifetime of the furniture it feels counterintuitive to use plastic from a sustainability perspective, WooJai says.

The bricks can be displayed as they are or constructed around a wooden frame to make different types of furniture.

A store out of paper

After graduating, encouraged by the praise his exam project had gathered, WooJai moved into a studio in Eindhoven and continued making furniture that he exhibited at design shows all over Europe. But even though he continued to receive attention for his work, it's hard to make a living as an emerging designer. After three challenging years, WooJai was on the verge of giving up when he was approached by COS, a high-end label under the H&M brand, with a request to build the facades and most of the interior out of paper in one of their stores in Gwangyo in South Korea. The idea behind the project was to raise awareness about alternative materials that can be utilized in the fight against climate change. After several months of constant work, WooJai was finally done and were able to attend the opening just before the store was closed down because of the corona pandemic.

– For me, it was amazing to see how my work could be incorporated in a larger interior scale. It is my biggest project to date, and I learned a lot from it. Now, I will focus on refining my working process and make every step more sustainable, from the water I use to the transportation of the furniture. Only then will I be genuinely confident about calling my work sustainable, WooJai concludes.