Inspiring women with a passion for surfing and paper

The creative Norwegian design duo Saltnwax consists of Naomi Dalsbø and Camilla Monsen, both graphic designers and photographers. Based far off on the west coast of Norway, with a united passion for surfing, the duo does everything from branding and photography to print designs. Currently they are in the middle of their very own first book release featuring eight inspiring surfing women.

Since three years back, Camilla and Naomi have been running their business Saltnwax from the west coast of Norway in the peninsula Stadlandet, as far west in Norway you can come – surrounded by waves, fjords and mountains.

The company does everything from building brands, creating visual content such as logos, business cards and posters to digital marketing strategies.

Camilla grew up in Oslo and studied graphic design for almost two years at Norges kreative fagskole, but she never liked the city life and wanted to get closer to the waves and the mountains. Which is why she decided to move to the west coast and continued studying graphic design at Høgskulen in Volda for four years, with a specialization in editorial design – and lots of surfing in between the classes.

Naomi on the other hand, grew up in Valderøya, an island outside of the city Ålesund. She is completely self taught when it comes to photography and graphic design – with a bit of guidance from Camilla. Naomi was seventeen when she had her first encounter with surfing during a surf class over a two-week period in Portugal. On the same day that she arrived back in Norway she looked up if, and where, it’s possible to surf in Norway, and the very next day she attended Camilla’s surf camp in Stadlandet. Shortly after that Naomi dropped out of high school and moved in permanently with Camilla and her husband who had already settled on the west coast by the waves.

– Surfing is just one of those things that if you try it, and you get hooked, you will plan the rest of your life around it. Even now, seven years later, I’ve not regretted my choice even once, says Naomi.

The beginning of a relationship with paper

The admiration for paper began when Camilla Monsen was a child. Her grandfather had a huge archive of developed photos from his dark room. She could sit for hours with a stack of photographs, printed on paper and browse through, amazed by the glossiness of the photographs. Both her father and grandfather worked as photographers and twenty something years later Camilla would too – with a fascination for paper.

– Come to think of it, I’ve had an unconscious relationship with paper my whole life. Ever since I was a child going through my grandpa's photos until now when we print our photos and illustrations on paper. What’s funny is that my favourite kind of paper actually is the opposite of glossy, I love paper with a lot of texture to it – that’s definitely my favourite, says Camilla. 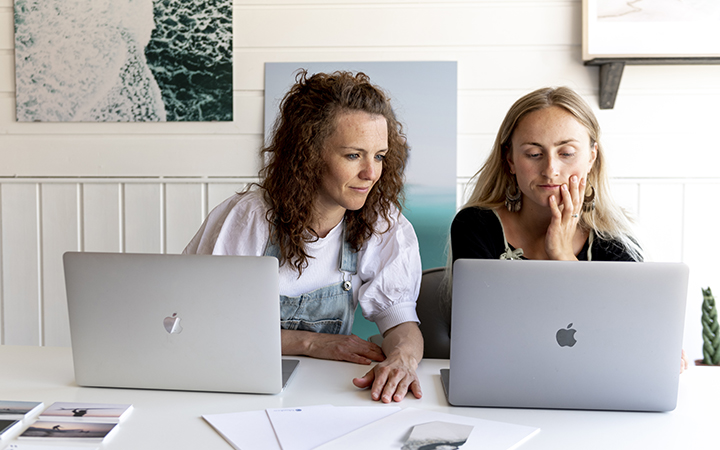 The latest project that Saltnwax have been working on is their very own book. Every chapter features one of eight female surf photographers from Scandinavia, presenting how they capture the essence of the Norwegian surf scene. One of the most challenging parts of creating the book was selecting the right paper for each and every chapter and story and using the full potential of the paper. After long and hard work Camilla and Naomi ensure that the reader of the book will go on a journey through paper and they highlight that the message behind the book is to encourage women to have the guts to go their own way. 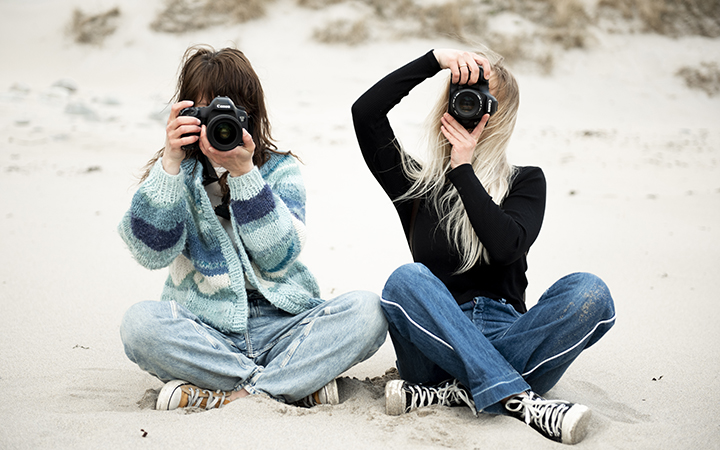 – We want to inspire women all over the world to dare to follow their dreams. Dropping out of high school to go surfing might not sound like the perfect plan, but if you never try you’ll never know, and in my case it led to something pretty great, says Naomi.