Seven years ago, Samantha Quinn had never cut anything from paper before. After lots of practice, hours of patience and with inspiration from like-minded artists, she has now worked on commissions for big companies including Fossil and Converse. On top of that, she’s one of two leaders of the Paper Artist Collective.

At the Far south western tip of England, five hours from the metropolis London, is the small county of Cornwall, famous for its local “cornish pasties” and Falmouth University. It is also the place where paper artist and graphic designer Samantha Quinn was bought up and studied. After finished her degree in graphic design, Samantha moved to London, where she began her career at fashion company Agent Provocateur.

– It started as an internship and ended up being a three-year long full time job. As a graphic designer I worked on a lot of exciting projects, before leaving to work for a design studio. After five years in London I wanted something else in life and moved to Australia for a year, where I worked as a freelance graphic designer in Melbourne, says Samantha. 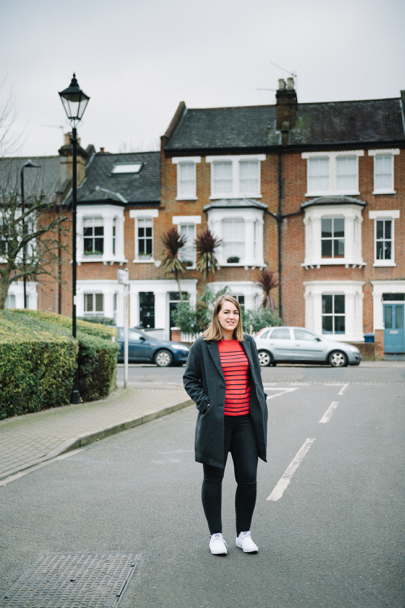 Samantha’s now back in London, still freelancing, and expanding on her other big interest in life. It was whilst trying to carve out a career in graphic design, Samantha found paper cutting. Living on an intern wage she would not afford presents for her family, so she decided to start making them instead.

– The paper art I did back then is completely different from what I make today, but it’s fun to look back at my early work and see how much I have grown during these past seven years. Recently, I redid a sunflower piece that I made in the beginning, and it was amazing to look at them next to each other. It’s a bit of an evolution of where I was”, says Samantha.

"It’s a bit of an evolution of where I was”

Through the years, Samantha has kept paper cutting has a hobby, something to do on the side of her regularly stressful life, a sort of meditation. She has always posted her creations on Instagram under the username @PrettyPaperDreams and she is a long time follower of other paper artists who have inspired her. One of those inspirations is the Norwegian artist Kristine Benum Braanen, a person that Samantha became very close friends with, but has never met in real life.

– Kristine and I have been running the Paper Artist Collective together since it began almost two years ago. We both thought that the world needed a place online, where like-minded paper artist could meet and exchange ideas, talk about projects and discuss different topics. And it has just exploded! There are so many people that want to be a part of the group, and we have to be really selective now, says Samantha.

None of Samantha’s commercial opportunities would have happened without the connections she made through the collective, and she has had commissions for big companies including Fossil and Converse. For Converse she recreated their logo in paper for an internal social media event at the Converse headquarters. Samantha is most proud of the project she did for Fossil, her first large commercial brief – to recreate International train stations out of paper for their UK press day. She worked on the brief with two other paper artists and members of the collective, Emma Boyes and Stacey Williamson-Michie.

– It is my biggest project so far, and I’m so happy that I got the chance to work with Emma and Stacey, they’re extremely talented artists and I we learnt a lot from each other. I still work full time as a graphic designer alongside paper commissions, so it’s always nice to work collaboratively on large jobs. I hope we get to work together again in the future, says Samantha. 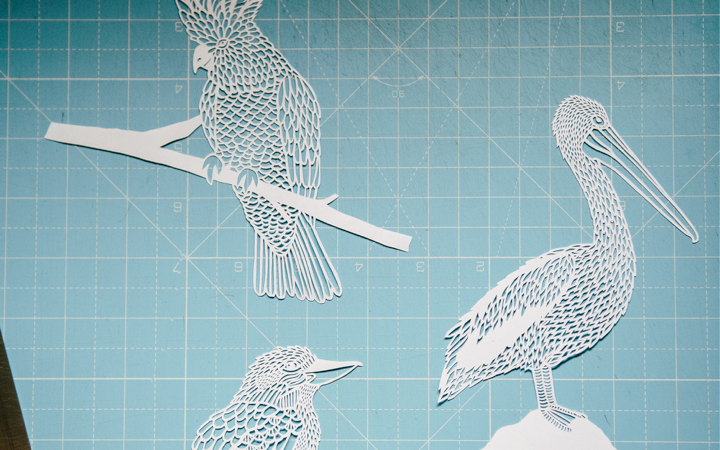 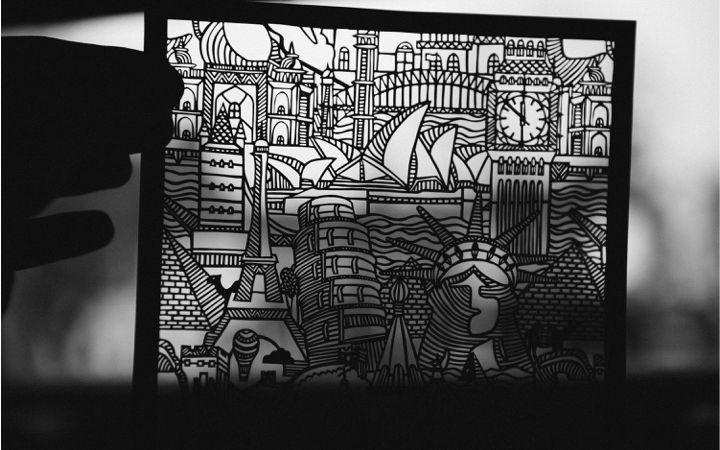 Cutter Samantha doesn’t see herself as a “deep” artist, not everything she creates has to have a purpose, however; it’s important to her that her pieces have personal significance. Her motifs root in very emotional stories, with a sewing machine and a Norwegian flag to name a couple. One of her pieces, a hand drawn and hand cut Singer sewing machine, was made in honor of her great grandma who passed away last year, age 103 years old.

– I made the piece for my mum who cared for my grandma in the last few years of her life. My grandma gave my mum a vintage Singer sewing machine which sits proudly in her sewing room, where they would sit together whilst my mum worked. The Norwegian flag was made for Kristine as a present, I love working with pattern and decided to work only with circles and triangles to reflect the geometric shapes in Kristine’s work, says Samantha. 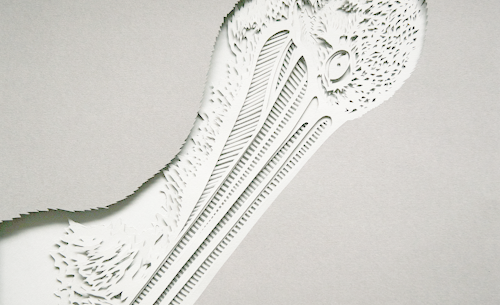 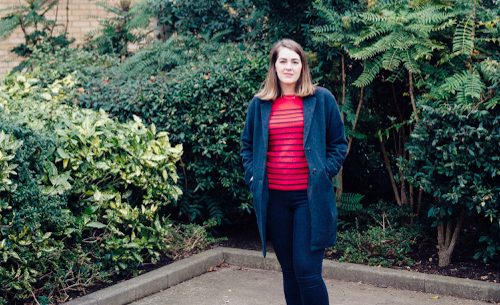 Samantha agrees that paper cutting is a very hot topic at the moment, she has noticed the high numbers of applications submitted to the collective, but she also sees the trend in social media. When Samantha first started she was inspired by other artists, and today, she herself is a source of inspiration, with a very unique expression. Her advice to other creators, who loves paper and want to learn more, is to cut as much as possible and change blades on the scalpel regularly.

– When I do make mistakes, it’s when the blade is too blunt. Change blades often, challenge yourself, dare to do wrong, get inspiration from others but always try to find your own unique expression of paper art. And experiment with paper! I’m a paper collector myself and I have learned a lot just by using different types of paper, says Samantha. 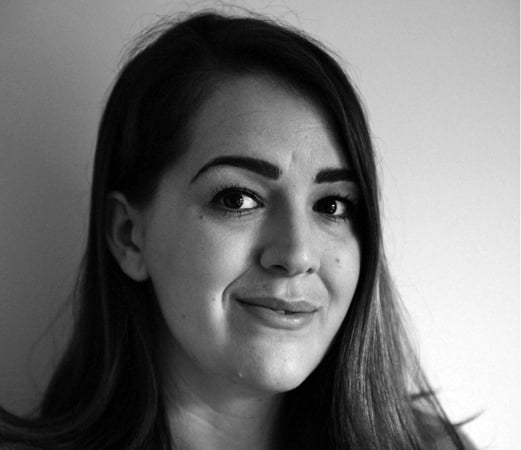