Meet Mademoiselle Maurice – the urban artist from Marseille in South of France. After a trip to Japan, back in 2011, she got increasingly aware of the effects humans have on the climate changes. And she discovered origami. The result became extraordinary paper folds which brings color to gray cities all over the world.

When the devastating tsunami hit the coast of Tohoku, in northeastern Japan, in March 2011, the artist Mademoiselle Maurice was in the country. She was far away from the disaster, but the whole experience was traumatizing for her. More than 120.000 buildings were destroyed and over 15.000 people died. On top of that, the tsunami caused a cooling system failure at the Fukushima Daiichi Nuclear Power plant, which resulted in a huge release of radioactive materials into the nature. This really made an impact on Mademoiselle Maurice, and she left Japan upset and angry on human behavior towards the nature. But the trip also got her an unexpected interest for origami.

– I found origami in Japan, and after the trip, I got home and wanted to fill the gray cities with positive energy. I wanted to bring back the nature into the cities. I learned how to fold and became better and better. Now I can make up to 12.000 pieces for a large installation, says Mademoiselle Maurice. 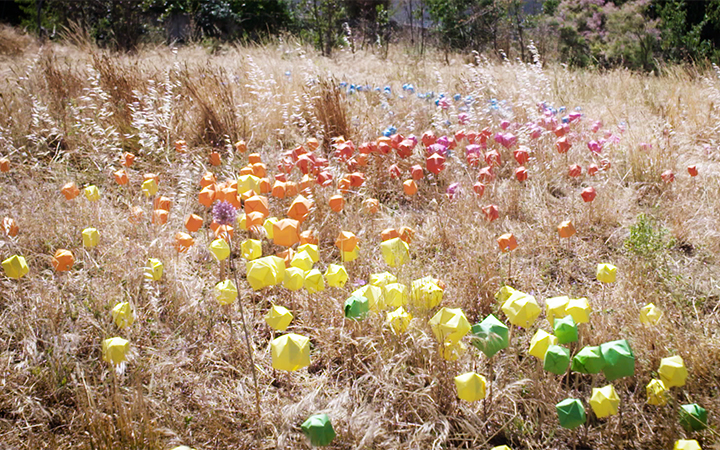 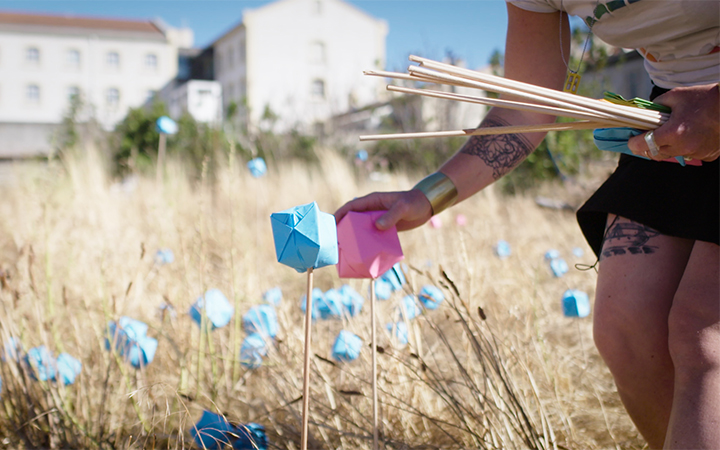 From architecture to rainbows

Mademoiselle Maurice was brought up on the French countryside. As a child, she played with what ever the nature had to offer, and she has always loved painting and drawing. Her parents wanted her to work with something “real”, so she decided on a career in architecture. However, after a couple of years in the business her heart was longing for something creative and she wanted to explore her artistic side. She tried out photography and painting but fell in love with origami.

– I love to work with my hands! And paper allows that, and it’s a cheap material to work with. When I first started out I didn’t have the resources to work with canvas or paint, but you can find cheap paper anywhere, says Mademoiselle Maurice.

All of Maurice’s work is based on the rainbow colors. Partly because she always has loved the colors, but also because they are political. For example, they are used by the LGBTQ movement and Green Peace. Mademoiselle Maurice normally uses them from the green to the blue.

– The rainbow colors are a symbol of peace, harmony, solidarity and equality. My art is a message of love to humans and the nature, we are all the same and we come from the same place. We need to take care of our planet, says Mademoiselle Maurice.

Mademoiselle Maurice calls her installations “open air museum”, since she wants them to be available for everyone to see. She has had exhibitions in cities like Paris, Berlin and London. 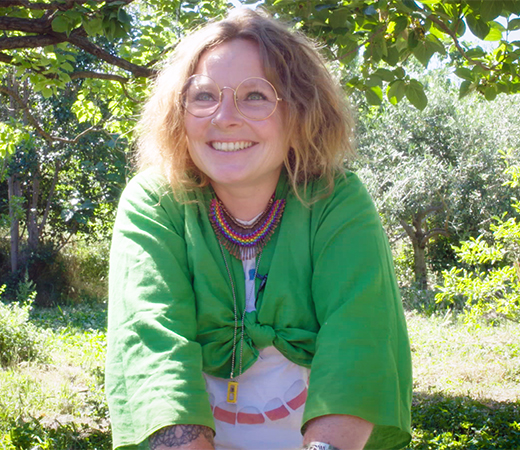